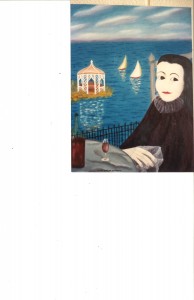 I was first exposed to the world of international art intrigue in 1996. Leaving Kiev, Ukraine’s Boryspil airport for what would probably turn out to be the last time, I carried with me a recently acquired wife, an even more recently born daughter, and a scattering of possessions as I prepared to return home to the United States after three years of doing journalism.

At least at that time, the main terminal for departing flights out of Kiev was a hectic, ramshackle place in which even a smooth passage through the local outgoing customs inspectors could prove an annoying experience. This petty annoyance level suddenly threatened to get a whole lot less petty when an x-ray of one of my pieces of luggage revealed the presence of a canvas stretched over a frame.

Just Waiting, the painting on the canvas, had been given to me about two years before that by my friend, the artist Judith Carlson DeAngelo, as a wedding present. It had made the trip with me back from the U.S. to my newlywed life in Ukraine, so I thought it only fitting that I bring it back with me, stupidly not realizing that the Ukrainians, in an attempt to stem the smuggling of icons and other local artifacts out of the country, were x-raying packages on the way out.

There ensued a tense moment in which the wrapping around the painting was removed. Then the uniformed customs official, who by all rights could have shaken me down for the painting, shot me a smile of dawning comprehension, saying “Eta prekrasnaya (That’s Beautiful)“ and – apparently touched by the beauty of the waiting woman – let me go on to board my flight.

Art, at its best, does just that. The subject of Just Waiting, wearing a La Gioconda-like enigmatic expression, tugs at the heartstrings in a way that makes mock of both temporal and cultural distance. Is the dark-haired pale-faced Mona Lisa of this painting an embodiment of beauty, a foreboding of death or the harbinger of a universal tragedy? And what is there about her placement in an Elysian harbor scene that summons up what amounts to an emotional schematic capable of being decoded by everybody from a customs clerk to the occasional visitor to my living room in upstate New York and eliciting basically the same wow response?

I suppose it’s a bit beyond my pay grade as a wordsmith to be able to definitely answer questions like these. Not being a professional art critic, I must content myself with these two basic axioms: 1) I know good art when I see it, and 2) Great Art endures.

The first of these maxims is probably useless. On the other hand, while the endurance of great art is such a common observation as to border on the trite, this consideration has proved the clincher for me in this case. Not only has the waiting lady stayed with me and held my fascination through the decades and the continents, the spell she has cast on me has outlived the marriage its gifting was intended to commemorate.

Now, sadly but perhaps even more predictably, this painting, along with a considerable body of evocative work, has outlived its creator. After a life of 70 years, Judith Carlson De Angelo has stopped waiting, as I suppose we all must, leaving not only family and friends, but also aficionados, with an irreplaceable loss.

But this is not the occasion for maudlin sentiment. Of course, I will miss the wild (and frequently drunk) times I had hanging out with Judy and her husband Larry and will continue to do so for as long as I can remember things. But the transcendent artist has more than fading memories to leave the world. Judy, through her work, will continue to evoke a human response from humans well after the time that I too have finished waiting.

So too is the case with Judy’s other paintings. Again, it is above my pay grade, but I feel in my gut that her other paintings will continue to resonate with both the art world and us regular folk for some time. Whether the depiction is of a modern Mona Lisa, Lenny Bruce being weighed in the scale of Justice or birds arranged in a pecking order that somehow reminds me of the Catholic Church hierarchy, replete with the requisite cardinals, these paintings evoke a Diego Rivera-like set of players and symbols that testify, in misleading simplicity, to the truths of our humanity.

How long this resonance lasts is of course a question I will not live to answer. Maybe it is a stretch to give it the 500 years of fascination that has been attached to La Gioconda herself. But I do know that even a portion of this immortality is more than most of us can aspire to and, by my inexpert but joyful reckoning, this portion will be an ample one for the artist whose wedding present to me still looks mournfully at me every time I pass within eyeshot.